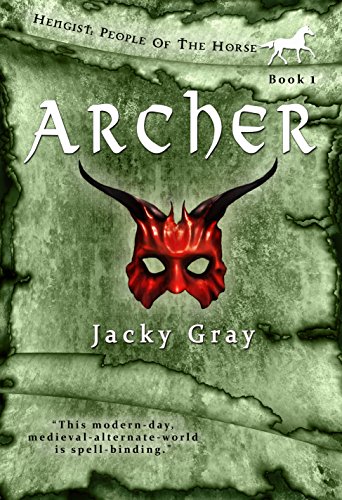 Mmm. Shoot an apple off his friend's head or lose his food, horse and clothes? Some decisions require little thought.
Archer is the sort of boy things happen to. Orphaned as a baby, his gifts make him different to other kids. He doesn't understand why he's so much stronger and faster than other boys; why a sword feels so right in his hand; or how every arrow he looses at a target will hit the centre, even if his eyes are closed.
At the Beltane ritual, he must fight his friends to see who is most worthy. But his real battle is with an enemy whose callous disrespect for the natural order brings dangerous consequences.
This swashbuckling romantic fantasy will appeal to fans of action-adventure, jousting and magical realism.

Interview with the Author:
Q How do the stories fit together?
A It's a little different than many series, because each book features a different hero, allowing a glimpse into each of the main clans in this world.

Archer, the warrior, introduces us to a world where teens experience jousting, sword-fighting and Beltane rituals instead of mobile phones, social media and reality TV.

Rory, the anglecynn, is the only person who understands the way Archer thinks when he's sent to a different world on an information-gathering mission.

Reagan, the magi, has to solve a DaVinci-style puzzle to figure out what is causing the increasingly dangerous accidents threatening his village.

Slater, the outil, has more links to the magic rituals held at the henges than the stone-craft required to maintain them. Until he's torn back in time to watch them being built.

Geraint, the renegate, hates his father's patriarchal ideals about trials and suffering, and is grateful when Siany finally brings some female energy into his life. But their pre-ordained meeting has far-reaching ramifications.

Q. So it's set in medieval times, then?
A. Not exactly, although you may think so as the people ride in horse-drawn carriages, have no electricity, and are governed by the seasons. Like in Lord of the Rings or Game of Thrones.

Q. What makes the Hengest Series special?
A. The way the reader can experience what it was like to live in medieval times, where it would take a whole day to travel thirty miles, but without grimy poverty or constant battles for land and resources. I've avoided having complicated names, hierarchies, and especially language, to make the story easily accessible. Each tale played out in my head like a movie, so I've tried to capture the pace and action of an adventure peopled by characters who resonate with heroic qualities, but don't take themselves too seriously. I sincerely hope I achieved it.

Q. Do you need to have read all the previous stories to follow the overall series arc?
A. No. Each story stands alone, however there are a couple of references back to characters/action from previous books, with sufficient explanation to get the sense of what's going on. Archer makes an appearance in every book, but this can be a brief cameo all the way to hogging several chapters in the last one as all the characters join together to defeat the common enemy.